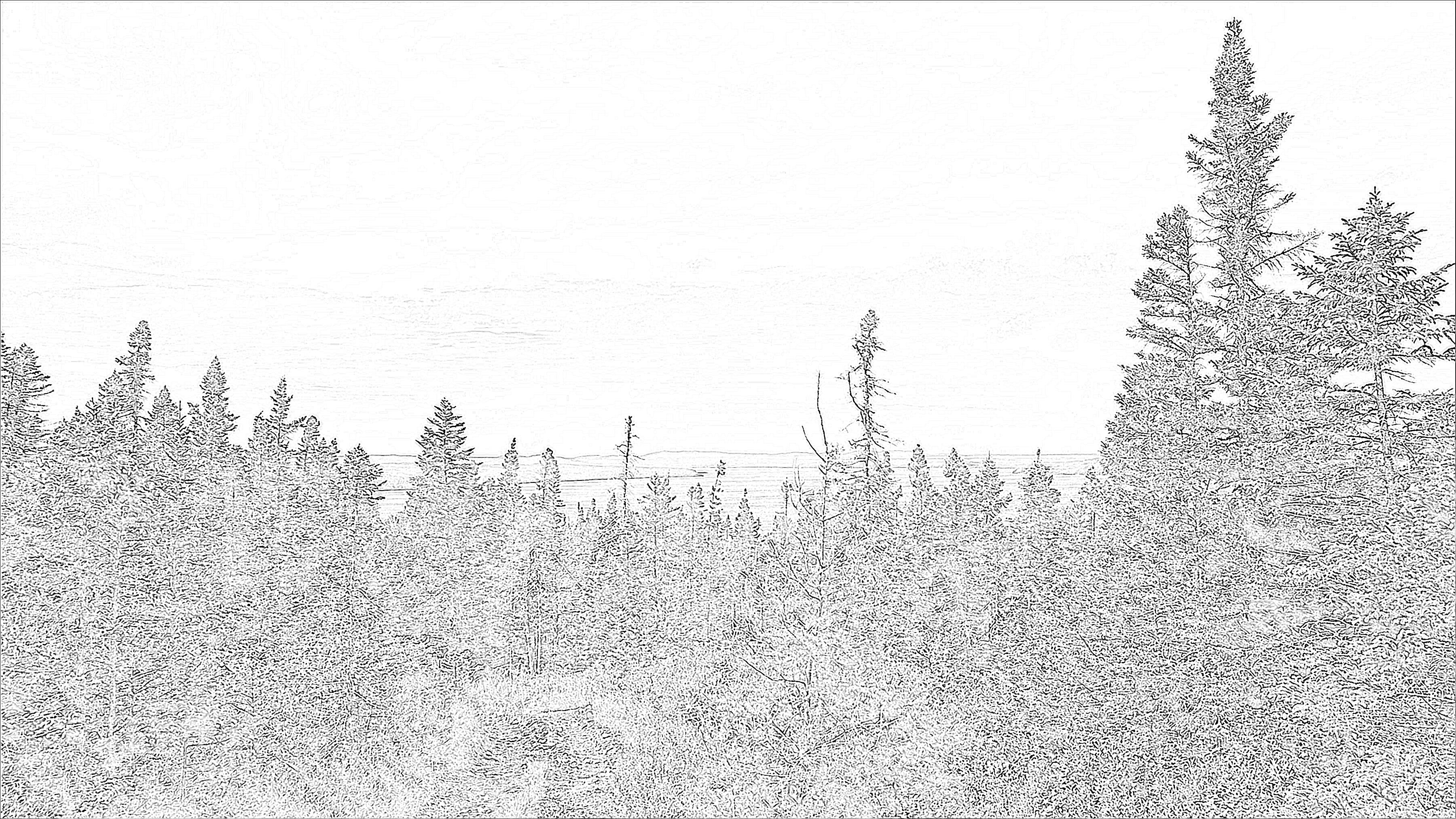 The days and weeks move on as they always do, and while its still winter, it feels like its loosening some as March has made its way around again.

Sated, Ralph leans back in the old rocking chair.  Tired, but the good kind, a day spent out in the open, a fire, good friends, food, and of course the inevitable memories.

Lets see, we were about 15 then I think, though the trips sometimes run together, that one was special.  That’s when I met Dot.

“Hey Ralph! Up for a trip in the pond and a boil up? Nice and warm, but still tons of ice, we can maybe get some trout!”

“Hell Yeah” Lemme grab some salt pork for bait and the axe! Perhaps we’ll get a rabbit to cook up too.”

“Perhaps, but I’ve got the old standby anyway, kippers and caplin!”

The familiar trail of the long run lays ahead, and off they walk, comfortable together, past hap’s cap, where they pause, and look out over the harbour as always.  Both thinking it looks smaller than it used to, but both aware that perhaps that’s not a bad thing, and that its big enough. Wise beyond their years.

The path splits off just ahead, one trail continuing, “the old road” they called it, but the pond is not that way.  Following a brook, the side path snakes along till they emerge next to an old beavers dam, ice and and still some snow clinging on, and the icy glass layout of the pond ahead.

Stopping on shore they cut a couple likely alder branches, and notching them around the top to hold their line in place, they rig up some make shift rods.

Marching ahead, they walk out on the ice, following the shoreline, they circle around a small point to enter a sheltered cove. Laying their old canvas ruck sacks down, they move off a few feet, and then start the ice chips flying with each down stroke of their axes.

They’ve done this before, widening the hole at the top and the sides as they know as soon as they break through they only have a couple seconds to widen the gap before the entire hole will fill with water.

With a gush the water floods their ice holes. Baiting their hooks with some fat back pork and cheese, they prop their rods over the holes and move off to repeat the process, making 3 holes each.

Once done, they idly wander back and forth between their lines, checking for a bite, or giving them a jig here and there to attract a trout.  Not necessarily an exciting process to some, but a relaxing, enjoyable one that a true outdoor lover can appreciate.

Sitting back on a flipped over beef bucket, exchanging stories, bragging; topics changing as fast as the wind.  Si gets the first trout, followed soon by several more for each.  Slipped on through the gills over a forked stick, between them they get 10 nice sized trout.

“Damn straight! How about you go ashore and get a fire going, while I pick all this up”

“Works for me!” Ralph replies, then heads ashore into the cove.  A fire will be nice he thinks, and there’s nothing like a cup of tea in the woods!

Knowing exactly what he needs, first off he strips some papery bark from a nearby birch tree, and some dry moss from an old spruce.  Then he walks up over the knob to where someone had been cutting wood or logs and finds a nice blasty tree top, dried to nearly cork, dried needles still attached, perfect to get a roaring fire going.

Gathering a few larger junks of wood, to keep some coals going, he drags it all off near the shore.  Clearing away most of the snow in a sheltered nook, he stacks the moss and bark, snaps off some smaller branches from the top and gently lights the fire.

Soon, its roaring, and larger trees have been put on top; too wild and hot yet to use for cooking but there is something welcoming about the smell of the woodsmoke and the feel of a bonfire that warms you to the core.

The time has passed quickly, but Ralph suddenly realizes that its been much longer than it should have taken Si, he walks back out onto the ice to see him, and a surprise.  Its Cooper, and with him, some strangers.

As they get closer, Ralph greets Cooper, and tries, failing miserably, to size up the newcomers without being obvious.

Direct and to the point, Ralph asks “Who do you have here Cooper?”

“This here is Aunt Maude’s sister’s kids.  They’ve moved back to the harbour, staying with Aunt Maude for now at least. This here’s Jim, he’s 17, and this here’s Doug, he’s your age.”

Cooper moves closer to the fire, and says “We have a little grub, how many trout did you get? Enough for all 6 of us?”

“Well we have 10, so one each and can split the rest, but I dunno, since one of them is nameless, perhaps she doesn’t eat either?”

“Oh! You noticed her did you? Well perhaps a little since you haven’t looked anywhere else since we got here. Ralph this is Dot, she’s 14, and wants nothing to do with you.”

Blushing and mumbling, Ralph moves off and pokes the fire, then walks to the brook to fill the old apple juice can with water to boil for tea.

Coming back he finds that the others have gotten out the old enamel frying pan and have the pork rendering, trout cleaned and ready to go in.  Ralph gets a long stout branch with a fork and positions it over the fire, hanging the apple juice can over with some attached rabbit wire.

Sitting alone on a log, he stares into the embers for a few moments, till Cooper yells “Come on bye, she’s not gonna bite you, and I was joking before.  She may want something to do with ya after all”.  With this, its Dot’s turn to blush and turn away.

Laughing Cooper digs into his pack and pulls out two bottles.  “I managed to sneak off some of Dad’s lemon gin” he says “and half a bottle of this dog berry wine. Though to my tastes, I think it might be turpentine.”

Passing the bottles round, sipping and cursing and coughing over the rough liquor, they bond like teens have done and will do for hundreds of years.  Stories flying, inhibitions loosened, Dot and Ralph are soon chatting like old friends, immediately a couple without anything further needing to be said.

Soon the “tea kettle” is boiling and a handful of loose tea flung in, the smell of fresh cooked trout wafting over their camp as well as that of kippers, caplin, roasted in brown paper on the coals.

Enamel cups and plates are passed around, the food is dished out and fingers and tongues are burned on the hot simple, but deliciously fresh food.

After everyone has eaten, they clean off their plates and cups by scrubbing them in crusty snow till they are clean.

Once done, Si and Ralph start to prepare their ruck sacks for home, when Cooper says “Wait boys, Doug and Jim have something I know I’ve never seen and doubt you have either.  Heard about em, but don’t think anyone in the harbour ever had them!”

The two new boys look at each other and dig into their packs to pull out what at first looks like a snowshoe harness, till they see its similar but with a single blade at the bottom.

In awe, Si says “Are them skates? Like on the hockey?”

Well not quite like the hockey, but yeah they are says Jim.  He proceeds to strap them on and stands up and tears off across the pond, followed closely by Doug to the whoops of the others.

When he comes back, Ralph asks “You think I could have a go?”

“Sure, but it takes some getting used to”

Over confident, and conscious of Dot beside him, Ralph grabs them and straps them on, dreams of flying across the ice like Jim in his head.  Proceeding to stand up, he takes one step before his legs decide to go in totally new directions they weren’t designed to go in and he falls flat on his rump with a whoof.

The others break down in gales of laughter before Jim says, “I tole ya!”

With a little prodding, some encouragement and some practice, both Si and Ralph manage to make a few small excursions without breaking any bones, with Doug, Jim and Dot taking their turn to fly across the ice to show them what they have to strive for.

Smiling to himself, Ralph gets up out of the rocking chair where he’s been dozing and puts the electric kettle on.

Too young, but we had 50 years together, over 40 of them as man and wife. Had good kids of our own, and now grand-kids.  I can see her in them.