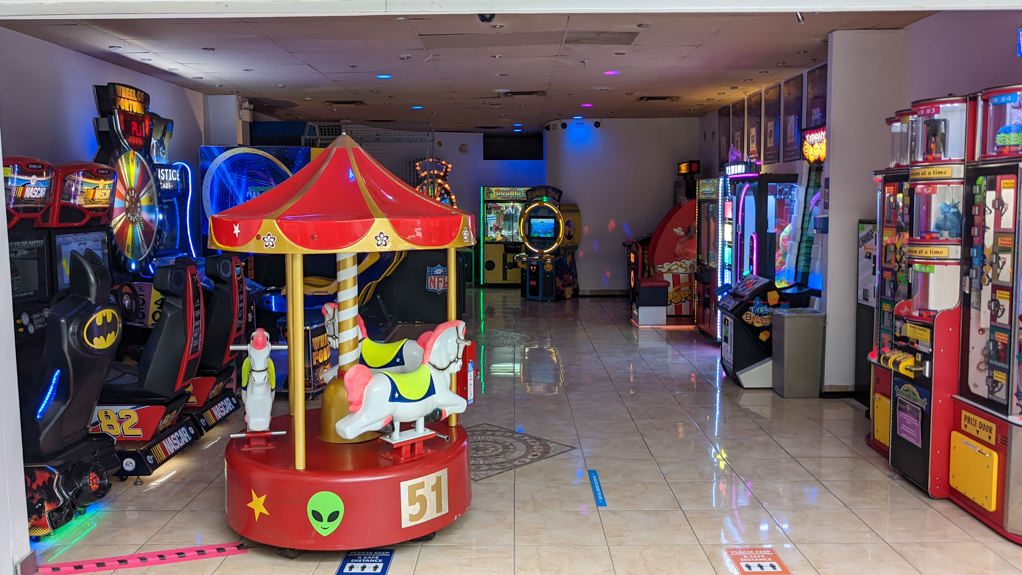 I was at Bedford Place Mall yesterday morning, and being an early bird Giant Tiger wasn’t yet open.  This mall is kinda like a wasteland now, other than Giant Tiger and Dollarama, there’s not a ton of businesses, or traffic.  At least I guess not, being the early bird I am, I don’t see it anyway I guess!

But while waiting, I wandered through the mall, and had a look around.  Not going to give you the directory, but there are a couple of interesting shops for card collectors and giftware anyway.  But this, to me at least, was new.  An Arcade!  Self serve by the looks of things, and can even pay by phone now!

It reminded me of years back, going with Mom and Dad to Clarenville to get groceries.  There was an arcade in Dalfens Mall then (it’ll always be Dalfens Mall to me) – owned by Eric Freeborn I believe.  If memory serves, it may have been once upstairs over the Chain Store too? Or was that just the video store owned/run by Scott MacDonald? (I need to write about that too, I nearly bought a Betamax!).

Somehow, it was always dark, and Dad would give me a dollar or two, and I’d run over and play a few games.  We never had much money to spare, so my dollar usually was just 4 games, each game being a quarter each, and used to have to get change from someone on the counter.  I was never very good at most games.  I had some skill with a few, but they were usually not in the arcades long either, with a constant rotation of games coming and going. It didn’t matter much though, I enjoyed watching others play nearly as much as playing myself, and learning how in the process.

I really can’t even remember the games now, I bet Pac Man, Galaga, Defender and Zaxxon were the constants.  I do seem to remember Ms. Pac Man too.

One lasting memory though, was looking at my watch, or the clock, and realizing I said I’d be back to meet Mom and Dad at the CO-OP and that the arcade would be closing,  turning and making for the door in a hurry, only to realize it had already closed when I ran face first into the glass door!