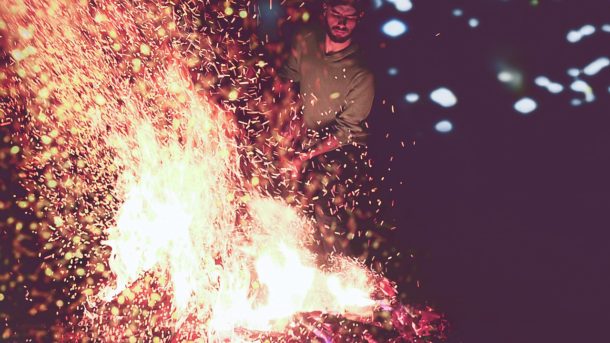 With apologies to Paul Simon! I’m not sure how this thought got in my head, but for some reason, lately, I’ve had the sound, smell and sight of flankers, from a nice blasty bough, flying high, in my memory.  I don’t so much have a story to tell , but a word, and a memory to share. What are flankers? Well the link can tell you they are sparks from a fire, but really they are more.  A part of a lifestyle, memories from a time many have forgotten, and may be getting lost. Bonfires, and boil ups, ice fishing and skating on ponds and lakes.  Days and nights spent with parents and relatives now gone. Indelible memories.

I am taken back to Island Pond.  Probably not one memory but many combined.  In with Dad and Keith, pulled by our old horse Pet on the slide, a fire going on the shore while we cut holes through the ice with an axe.  No ice auger for us in those days.  Salt Pork for bait. Not sure we ever caught one, but what was better was the time spent together.

You know you remember them too, and can smell them.  The orange needles from an old spruce or fir top thrown on a fire, immediately igniting into a fireworks display better than any Canada Day celebration.  The accompanying smell as they rise high into the night, throwing an orange glow on the snow and ice. While your tea boils in an old apple juice can strung up with rabbit wire over the fire.

Flankers aren’t a concrete thing, but a portal to a world that was, and memories we cherish.