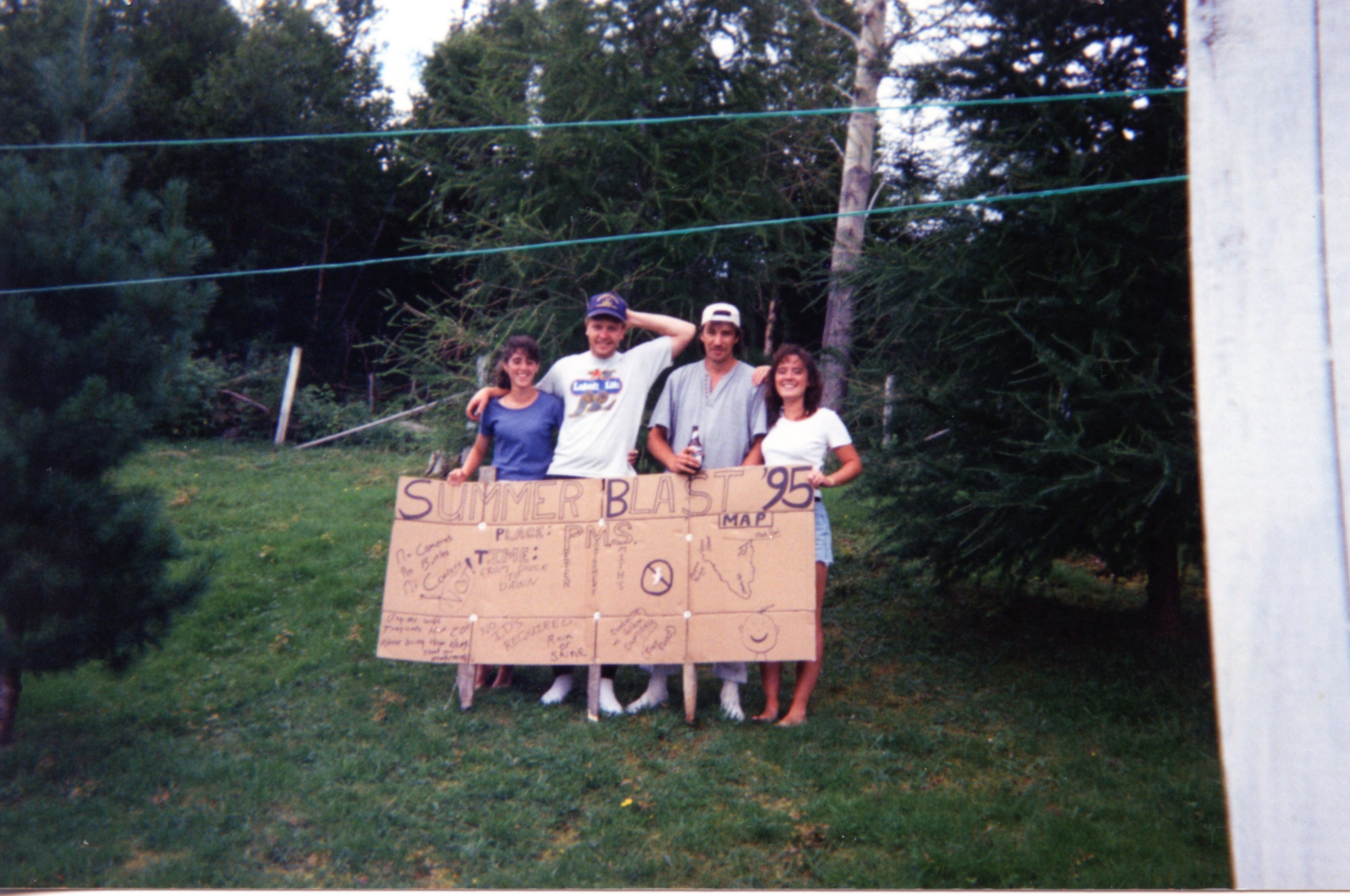 Like most people of my generation, house parties were a normal thing to attend, but I’d never held one, mostly because my folks were pretty stay at home, and didn’t go out a lot for extended times for me to actually have a location. There was always a crowd at my house, people liked my mom and dad, and the feeling was mutual, but never a party per se.

When my sister graduated high school, she moved to Halifax to study.  Much younger than me, she was the apple of all our eyes and of course we missed her like crazy.  In the summer of 1995, Mom, Dad, and Keith made their first ever trip outside the province, and took a vacation in Halifax to visit her.

And so it began… I believe it was a Satrurday (Though maybe it was Friday?) morning in August, I was on vacation from my job at the Radisson/Delta, when I drove the family to the airport in St. John’s to see them off on their trip.  I got back to Random Island about noonish, and what did I see at the turn off in Elliott’s Cove?  Well the sign on the left of course, created by the culprits pictured.

I quickly removed it, a little paranoid that the police might see it, and I didn’t want to give them any reason to come over to our little deserted part of the world.  I may have been a little prophetic in that regard, because around supper time that evening a fire started at the dump, and while I’m not sure, I think police were called down over the island to it.

In the meantime, I tidied up the house some, and at some point picked up Bernard, and some beer and headed back to the house to wait.  and wait. and wait.  I was expecting a few people to show up early, but it was more like a few batches.  I think around 8pm we got the first wave, and then….. it became legend.

Nothing to see here, move along.

I was only expecting maybe 20 or so people, the close group that always hung together, and they were amongst the first to show up.  Full of devilment as always with our group, ideas sprang to mind.  On the right you’ll see an outline of, I believe, Kendall Pitcher, as at a crime scene, with a squirt of ketchup for effect.  Then Steven Patey rode his trike up to it flat out, and slammed on his brakes to make some skid marks.

That was an indication of the kind of night it was going to be. Bernard wearing mom’s …. whatever it is

Luckily we had a fairly big house, with a finished or semi-finished basement, and that it was also a beautiful night.  Why? Well at one point Bernard and I counted over 100 people there we knew, and there were more we didn’t!  What was awesome about the whole thing was that it never got out of hand, there were no fights, and nothing was broken.  Well except one plastic stool that someone sat on.  I’m looking at you Jim Bailey.  But there were good times galore, people got into everything, not maliciously, but in fun.  As you can see here, Bernard decided to try on one of mom’s…. whatever it is.

Things finally started winding down around 2 am I believe, with if I remember correctly, 18 people sleeping or passed out in the house, plus I think Jim Marsh sleeping in his truck outside.  Things get muddled after 18 years, but I think it was Randy Baker I found asleep in the stairs, that couldn’t have been comfortable. I was told at one point cars were lining the road from Roy Smith’s house to Uncle Hay’s house on both sides of the road, a distance of likely a kilometer.

Well with varying degrees of success we got up the next morning and got our day started.  Luckily my friends were and are good friends, and many if not all of those 18 people were up mopping floors, picking up bottles and garbage, cleaning and washing dishes.  Of course some devilment had to be had, so Eric put the teaspoons in the Random Island shaped souvenir spoon rack Dad had made, and put those in the cupboard with the forks and knives.  The plates of course, went in the cutlery drawers.  And as happenstance would have it, a few hours after everything was cleaned, the well went dry!

As I said nothing was broken other than that one stool, but for months afterwards, one of Dad’s pairs of pajamas were missing.  For some reason, some one had hung these up in the closet on a hanger under something else!

The party itself took on a legendary status with people I didn’t know, mentioning to me that they had heard about it.  I remember one time especially the worker at the driving range in Clarenville telling me about it!

In total I gathered 30 dozen beer bottles from around the house, as well as 15 liquor bottles.  God knows how many were never found thrown through the woods or in Alice’s garden, or how many were taken with the people when they left.  I’m glad I found that many though, as I was broke, and I used the cash from those bottles to pay Anthony Avery to steam clean the carpets for me! Yes, there was a little mess 🙂

I’d love for anyone who was there to share there memories in the comments as I’m sure I’ve forgotten lots of things!

After a late night at the bonfire at Rickman’s Harbour Pond, with many a beverage in hand, Eric and I are usually the first to stir.  Always a morning person, no matter how late the night, I am usually awake with the dawn.  Its May 2-4 weekend, Victoria Day, probably the biggest party weekend of the year back home, and for quite a number of years, we always made our way to Elvis’ cabin for it.  We get the naphtha in the old Coleman stove and start pumping it up, while someone else heads to the pond for a kettle full of water.  Firing up the stove we get the kettle on and the frying pan too, and soon the scent of bacon is wafting around the place, causing the rest of the crew to stir.

Big heads require a beer to start the morning, a hair of the dog, to help cure the hangovers, that and a nice greasy plate of bacon, toast and coffee get us started for the day.  The sun is shining, unusual for May 2-4 to be honest, but its about 2 degrees Celsius outside, and we got about an inch of snow over night.  Doesn’t matter, the few of us who actually want to trout pack up or rods, tackle and baskets and make our way to catch lunch before the partying starts again.

We laugh about Junior and the beer box on his head, him swearing the whole time it was me.  We make fun of Kendall and Jamie singing the wrong lyrics to Lightning Crashes at the top of their lungs the night before.  We laugh at me lighting the barrel on fire with white gas and singing my eyebrows when I thought it was barbecue starter.  Its a ritual, a rite of passage, and all good natured.  We drive that back road, stopping at ponds we can reach easily, and catch a few trout.  Of course Eric catches more than anyone else as usual.

Back for lunch, pork fat in the pan, trout coated in flour we make our lunch, while the barbecue goes outside stacked full of hot dogs, hamburgers, steak, and everything you can imagine. Lunch over, beer in hand, we start visiting everyone else’s camp sites.  Its like Christmas visits, and part of the event. Moonshine and drinks are shared.  Everyone has a slight glow for the day.

Its friendships, events, memories created that last a lifetime. Its the 24th of May and we likes to get away.