When we were kids in school back on Random Island, there was no March break (and maybe there still isn’t, no idea).  We did have some time off at Easter, but the big week I remember most was Education week.  We’d try to earn points for our classes with themed days, dress up, participation, best decorated chalk board (I really think Karen’s or more specifically, Karen, class nearly always won that, no wonder she became a designer!). We’d have read alert (at least I think thats what it was called) where when the bell rang 3 times we’d have to stop whatever we were doing and read for 10 minutes, and the grand daddy event of them all, the talent show.

This was always a huge blast, I remember in grade 6 I think it was, in our class all the boys in our class dressed as girls and vice versa, and went on stage singing what shall we do with the drunken sailor, carrying flasks filled with water and vanilla to simulate whiskey.  Maybe I’ve got two years combined together, I don’t know anymore. Then there was the year we lip synced the Rolling Stone’s Emotional Rescue.

It may not have been education week, but some other event (and I know there’s a picture in a yearbook somewhere that’ll I’ll try to find), but at one point our class, or group of some sort put off a skit where I was the narrator, sitting on a high stool on the left of the stage.  I remember parents were there, but not exactly much more, except… except… that at one point I lost my balance and went tumbling off the stool, off the stage, onto the gym floor.  Now at this point I was a little bit smaller than I am now, and I remember mom was there and thought I was killed.  But nope, i got up walked up the steps picked up the stool and sat back down to keep narrating.

Probably too stunned to know the difference I say! 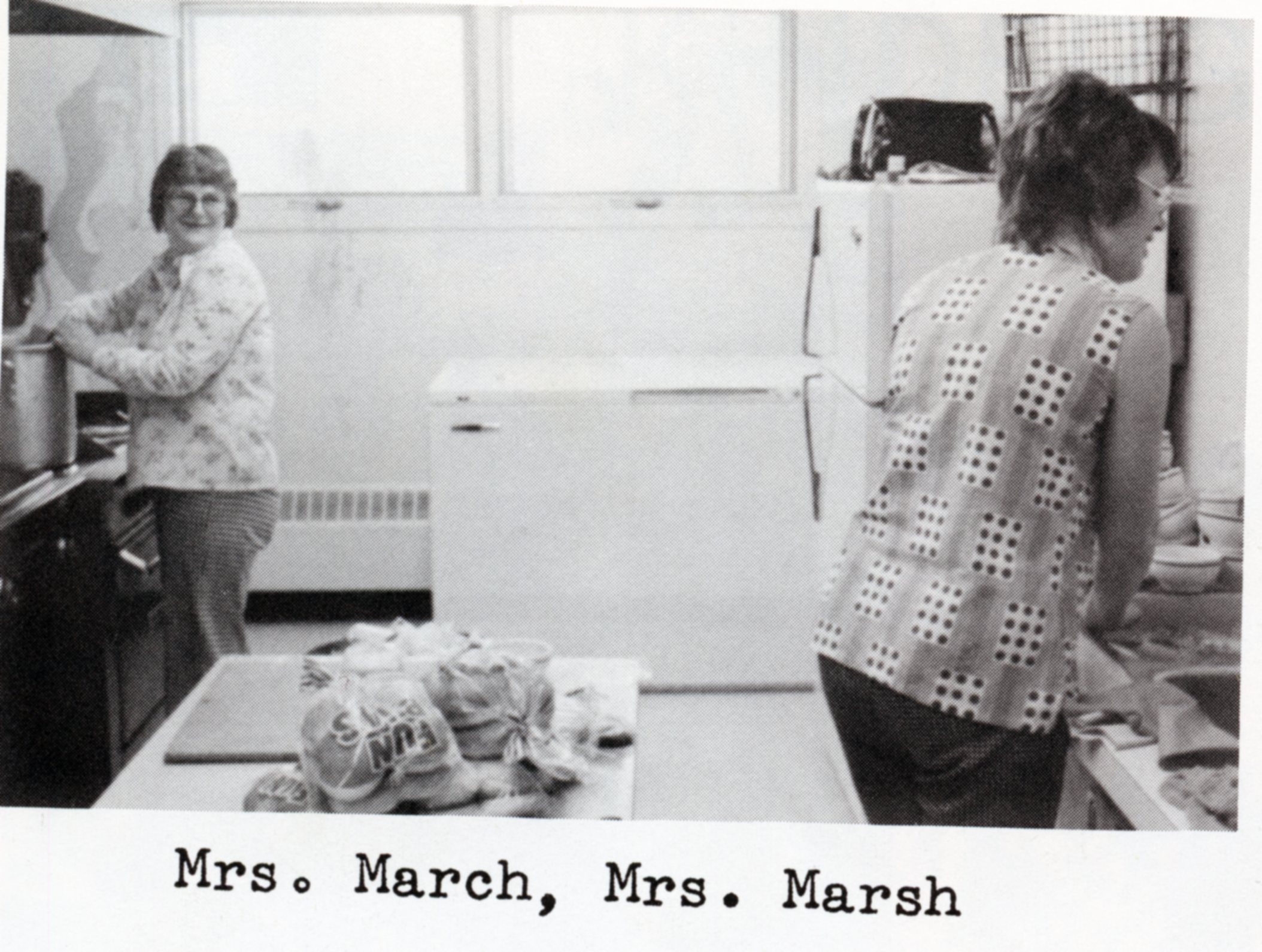 When the “new” school opened up on Random Island, it had a cafeteria for hot lunches.  For those of us who had bussed it to Shoal Harbour before this was something new, we had only had the lunch can before that.  Those who had gone to school in their local one rooms, in all likelihood, went home to lunch most days, so was new to them too, though hot lunches may not have been.

Hot lunches in the school system didn’t last too many years, a victim of budget cuts I assume, and the cafeteria at school now likely just takes up space except for special events, but back then Nina March and Gladys Marsh cooked up food for the kids at a nominal price every day.  We had chicken and chips, fish sticks and chips, amongst other things, and it was all yummy and filling; well except the dreaded goulash…

Now to be fair, the dreaded goulash is just my opinion, lots bought it every week or second week or whenever it came up, but to me it was (and is) disgusting!  Back then we called it Hungarian Goulash, and it was something at the time I had never heard of.  So I was kind of excited in my 10 year old way to try some.  Well lets just say its not an experience I want to repeat, I’ve never been fond of any ground beef dish that’s not been “formed”, e.g.: meatloaf and burgers, so once I saw what it was and tasted, I think that may have been a lunch-less day. To this day I am still not fond of hamburger helper, sloppy joes, or any other dish of that ilk.

But while that memory stands out, there were a great many days when there was chicken and fish and other things I did enjoy, and I remember the line-ups being really long any day we had chips (fries).  I especially loved the fish sticks, it doesn’t seem the ones you get nowadays taste the same.

Its too bad kids of today can’t get those hot lunches, but I’m glad we did, and look fondly back on them.  Thanks Nine and Glad!

In 1973, the “New” school on Random Island opened. Originally called Random Island Integrated, its now called Random Island Academy. In Grade 11, I was part of the drama club that put off a, in pretty much everyones opinion, great play called Riverrun, semi based on a book of the same name about the Beothuks.  I am not sure, but I think the play may have been written by our teacher, Ray Budgell, but I could be wrong, that was 1982 after all.  I have great memories of it, and while we didn’t win anything at the festival, I will always feel we won in the court of public opinion, and look back fondly on our performance.

Some of our practices broke down into some riotous laughter for sure.  There was one day I could not keep a straight face at Evan Reid’s town crier saying Hear Ye, Hear Ye.  And one other practice where Virginia Smith said “Me fell down to me knees” or something like that.

I was also proud to be a member of the Crusader Basketball team in Grade 10. I was quite good at keeping that bench warm, and got to visit quite a number of places for tournaments.

Was lucky to be a bench warmer for some great players too, we went to the provincials that year, and if memory serves, missed out on the playoffs by score differential of 2 baskets. I have no illusions about my abilities, but I am happy I got to participate, and also look back on that fondly.

Our coach, Rod Nichol, was also our gym teacher, and our Biology teacher, and this particular memory relates to the latter.

Rod had a terrific sense of humour, I remember the correct answer to a multiple choice question “An example of osmosis is…” being Mork’s finger (Mork and Mindy for all you young whippersnappers, look it up).  Another great memory relates to the title.  Like all teens, we weren’t above sneaking a snack into the classroom, which of course wasn’t allowed, a rule enforced more by some teachers than others.  Well this one Biology class in Grade 10, Jennifer Adey had a bag of candy in class, and was caught eating them by Mr. Nichol (Rod). Of course he yelled at her, and promptly confiscated the candy.

But the funny part is instead of keeping them in the desk to give back later as was normal, he took the bag around the class and shared the candy with everyone but Jen! I don’t think there was one left at the end.  Well Jen, if you’re not gonna share…. see what happens?