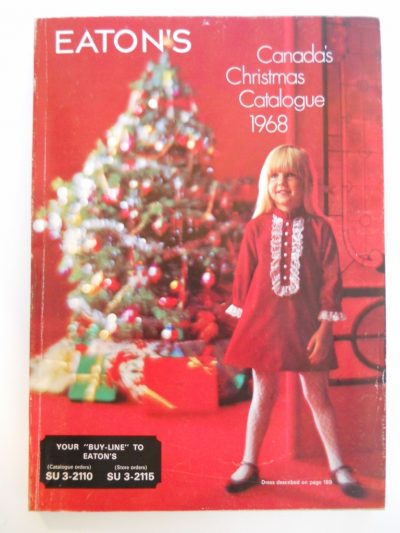 Got the wish book earlier this week, and my how its fallen.  Less than 200 pages and the paper is so cheap feeling.  I remember as a kid we’d get this and pour over it for days, dog earring pages, circling toys and skates, slyly looking at the underwear models….

The bonus was we had two! Not only was there the Sears Wish Book, but we also had the Eaton’s Christmas Catalogue you see above.

Mail order was the thing for a lot of us back then, no big name stores nearby in Clarenville, though of course Cholock’s had their big toy section.  And St. John’s seemed as far away as Toronto does now back in those days. One thing I remember wanting for ages, and then knowing I had it when I found it hidden in the closet underneath the stairs was a chip away set.  Was these lumps of plastic that came with a mallet and chisel that you were supposed to chip away to get to the statue underneath, and then paint. The reality was a little different though cause one or two smacks and it all fell away.  Kind of a let down.  I remember other things too from the catalogue; a wood burning set that was kinda fun, let you scorch patterns that were painted onto wood, the old dinkie car tracks, a race track, and of course the ubiquitous table hockey game.  Ours had the replaceable plastic players something like those in the picture here.  And they all had their names and numbers.  Remember there being the old Seals players, and Dave Dryden (Ken’s brother) there as a goalie for Buffalo! We’d jam the puck against the corner of the net, the wind the defenseman up until the spring had too much tension, then whip the puck down the “ice” and half the time down the stairs!  One puck was so worn down, we played that so much!

Back to the catalogues, not only were they good for shopping, but after, some people would fold alternating pages to make an ornament! Of course, I’ve also heard stories that before my time, the pages made a good substitute for toilet paper in the old outhouse.  Might be indicative of how good the items were?

When I was a boy, Bax and Eli Randall had a store on the road in around the harbour in Shoal Harbour.  I even remember an old gas pump outside saying something like 35 cents a gallon, though it wasn’t operational that I can recall.

The store had pretty much everything, building supplies (who didn’t have panel board on their living room walls from Randall’s at some point?), groceries, appliances, and many other things, plus, lots and lots of dust! Dad used to say though that Bax and Eli would rather spend hours talking about chain saws and chain saw parts than they would sell a fridge or stove!  I remember going there with Dad for plugs and feeler gauges and the like for the old pioneer,and they’d pull out the parts and talk about them and show them off.  There was rarely a light on, or if so, very few, always so dark and dingy.  Fussels cream and Carnation milk on the shelf covered in dust.  It was…. heaven!

I always heard stories about the Randall’s being “frugal” as well, no idea how much truth there was to any of them, but my favorite had to be the story about Bax bought 2 cars in St. John’s, and rather than paying someone to drive the 2nd home, he’d drive one a mile past the other and walk back and do the same over and over till he got them home!

I can still see the store now in my minds eye, not far from the old bridge as well with the double concrete loopy sides.  If I remember correctly it was so narrow you used to only be able to have one car on it at a time, but that’s fuzzy now. 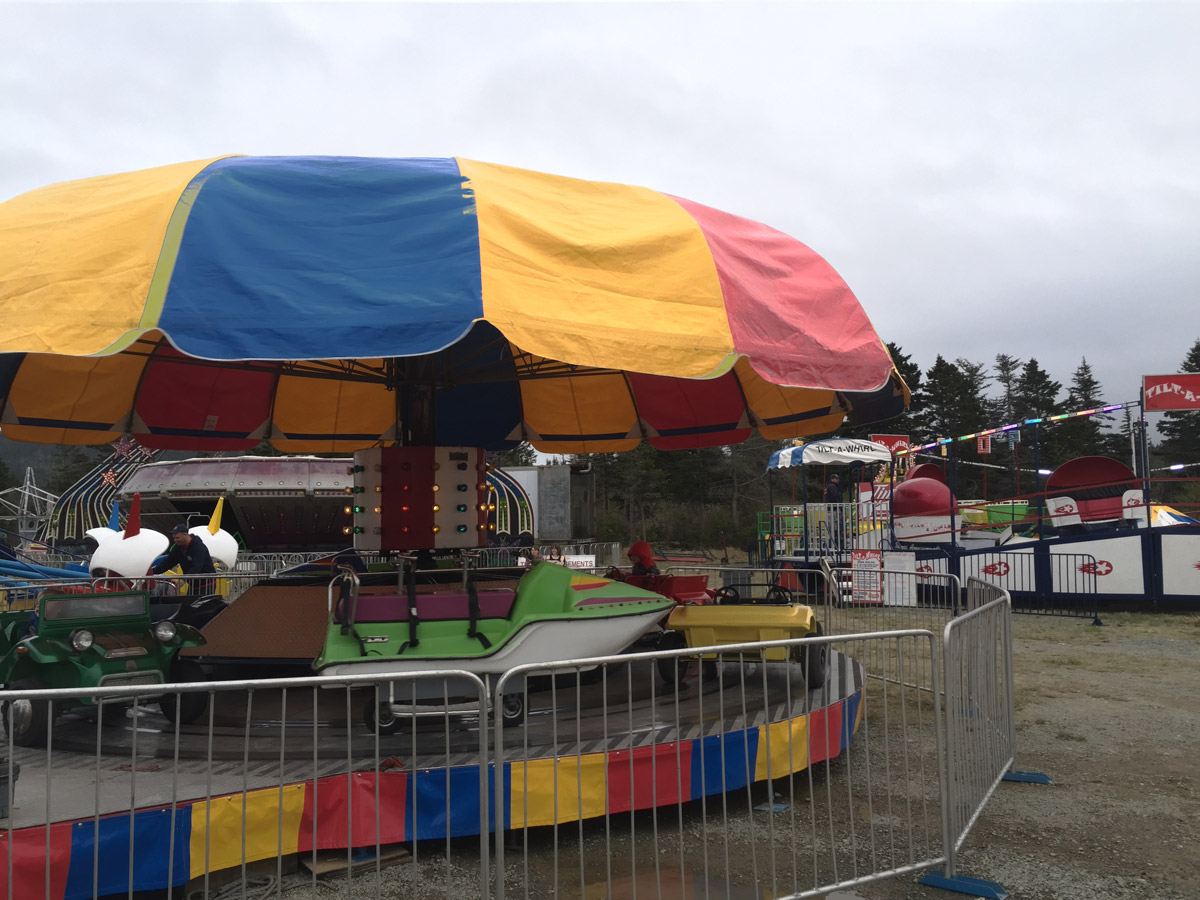 The fair back home means only one thing, Thomas Amusements.  When I was younger I’m pretty sure there was a second one too; maybe Kavanaugh, Kincaid?  I forget for sure.  In any event, for many, less so me, it was a highlight, or two depending on how often they came to town, of summer.

These travelling amusement parks always reminded me of the stories of Gypsies.  They’d seemingly appear overnight in a parking lot, and set up rides, games, cotton candy, candy apples, and who knows what else.  One year though there were bumper cars, I did love those!

I was never a fan of the rides, they always were spinning things that just made me nauseated, not happy!  But the treats were good, fries in the old gray carton, eaten with a toothpick and black malt vinegar, cotton candy, etc.

Also some of the games were fun, if nearly impossible to win.  Spin the wheel, knock over the milk cans, ring toss, etc.  I remember once winning a little blue lantern on something, and several stuffed toys.

As I got older, the luster seemed to wear off for me anyway, and I can’t say I find it enjoyable anymore, but they were definitely a huge memory of boyhood 🙂 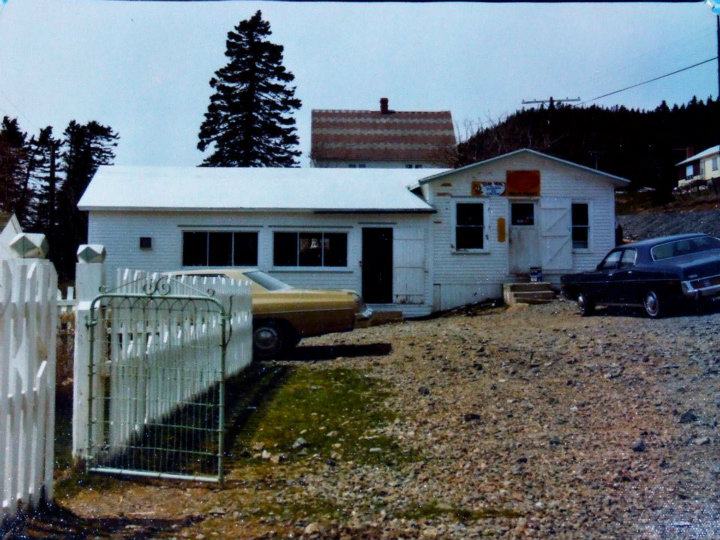 Random Island had about 2000 people when I was growing up, and of course a major metropolis like this needs somewhere to shop.  So lets see, how many stores were there?  I’ll probably miss a few but and misspell more, and only trying to list those on the go in the mid 70’s…

The last one, people called ours, but it wasn’t, it was a co-op, owned by 3 or 4 families, and over the years run by May Smith, Cecilia Smith, Alice Smith and Mom.  I can’t say I recall it being many places, it’s last location was the old shop building across the road from our house, and we ran it, but I do recall being in that same building somewhere else, I think down on Alice’s garden, but it’s foggy.

A lot of these weren’t stores like now, they had no “hours”, you just went to the door of the owner/operator and asked to go out.  Some had more things than others.  There was a freezer in the one in Apsey Brook, with some staples like pork chops and fry beef (who remembers fry beef?) and Braddock’s sausages.  Treats like Screwball Ice Cream, Buried Treasure, Long Treats, and of course Hostess Chips in the foil bag. We sold salt beef by the piece, and sliced frying ham and wrapped it in waxed paper.  Potatoes were in 50 pound bags and sold bv the each or the pound.  And of course, we had Carnation mill and tea.  Remember Red Rose tea with the little cards in them?  Brown paper was on the big roll with the straight edge to cut it off.  Our cash register was a drawer with old bowls nailed to the bottom. One of my favorite memories was of Uncle Larry Leawood coming to buy cat food.  He always called it pullit cat food, cause he had been reading the french side of the label. God I loved that man, so full of hidden surprises.

Some of the stores had much more, Boyd Smith and Fred Burt both sold furniture as well as groceries, and you really could manage to get by without leaving the island if need be.  I don’t know how any of these stores really made a go of it, there were so many for so few, but they lasted for years and years.

What did I miss? Leave a comment and let me know stories of stores back home.