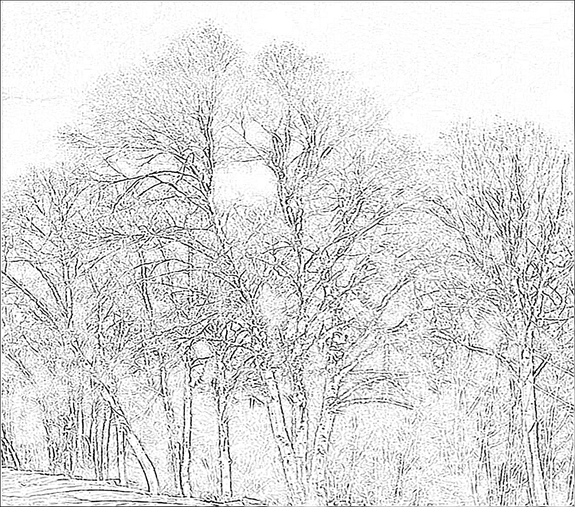 The well worn leather traces creak as Bax’s old mare pulls the double slide in the long run. Ralph and Si sitting on an old bren full of hay for a seat, Bax up front giving the reins a flick now and then, though its not really necessary, the horse knows the path and routine as well as they do.

Its been a cold winter, but till now, very little snow, and the stands of birch and maple that Bill and Bax and Si’s father, Walt, had cut last fall before Bill went away to Millertown have just sat in their stack.  But now a fine thick snow was on the ground, and it was time to get the wood out, god knows the woodhouse had taken a cutting this year.

“The boys are growing up” Bax thinks to himself, “nearly men, 12 and 11 now.  Less time for riding on the old slides, more time walking behind” he thinks with a chuckle; with their father’s away for work, they have to shoulder a load too.

Flicking the reins once more, they pull off onto the side path, then Bax brings them to a stop.  Standing up, he remarks “I think there was just as much creaking from my old joints as there was from them traces.  Not sure how many more years we’re gonna be able to do this together boys, soon be just you.”

“Now stop that Uncle Bax” says Ralph, “Your only 62, you’ve got a ton of years left in you yet.  Plus your too contrary to die anyway!”

“Mind your elders, you young pup! Now you and Si get the sled loaded, I’m gonna go check a couple slips I got over the way.”

As Bax marches off, Si and Ralph make there way to the stacks of cut wood.  Picking up the large sticks and balancing them on their shoulders with an arm holding them, as their fathers and grandfathers have for hundreds of years.

Their feet crunch in the snow as they march back and forth.  The horse looks small, but she can pull a tremendous load over the snow, and they stack the sled high, wood held in place with pegs inserted into the sled.

Meanwhile, Bax pushes his way through the old woods trail, following blazes on the trees, and the knowledge and “feel” of years to find his slips, loops of braided wire, tailed in rabbit runs, or in little trails of his own directed into man made rooms of tasty birch and twigs.

Rabbits can be plentiful, but come in cycles, some years there are barely any.  That can make for a lean winter, as rabbit is a delicious addition to the staple of potatoes and salt fish, and any other game that may have been stored away or cold packed in the fall.

He doesn’t like to say it, but the arthritis makes these treks hard now, especially when the snow is deep.  Of course that also works to cover the slips, but this time its been clear for a while, and some nice moonlit nights have had the rabbits running.  Quite a few lie frozen on the crisp snow, great for the roaster, or stew pot or a pie.

The boys say little, comfortable with each other and their silence, but finally Si breaks the quiet.  “He’s right you know.  Grandpa died when he was 68”

“Yea, I know Si, but old man Sampson is pushing 90 and he’s still tailin’ slips too.  Uncle Bax is gettin’ the arthritis bad though, not sure how much he can do like this anymore.”

“Yeah, I know, anyway, that’s enough for Blackie, lets go see if he got any rabbits.”

The follow the path of Bax’s footprints through the snow, to meet him coming back, red faced and puffing.  “Dear god boys, you got the sled loaded already? I must be getting old, hauling a few braces of rabbits got me beat out!”

“Lard, Bax! There must be 20 there! Been a while since you checked em?”

“Well a week or so yeah, getting so I can’t walk in here all the time like I could.”

Grabbing a few braces each, the boys get the rabbits back to the sled and help Bax up on top.  Grabbing the reins he gives a flick, and Blackie starts to pull, slowly at first but then surely, pulling the wood out the trail as the boys walk behind.

Back at the harbour, they unload the first load at Bax’s house, then turn around to do it all again.

“Your going to have to do it on your own this time boys, my hips are shot, I can’t make another trip today.”

Glancing at each other, they ease the horse around and make their way back to the woods, another first together, another sign of manhood coming on.

Two more loads they pull, one to each of their houses, then they take the horse back to her stable, water her and rub her down and give her some hay and oats for the night.

Returning to Bax’s, they see he has cleaned the rabbits, and has them cut up.  Even has the boiler on to get ready to bottle some.

“See what I mean Uncle Bax? Too contrary to even take a break”

“Just can’t be idle boys, tis not in me nature, but I wasn’t able to muck the woodhorse around or start sawing any of that.”

“We’ll be back tomorrow Bax, we’ll get that sawed off and stowed in for you.”

“Not quite as cold a winter this year as it was that one”, Ralph says, “That’s a good thing too, cause along with his contrariness, I think I’ve got a touch of Uncle Bax’s arthritis too.”

“Ha, well you got the contrary part right anyway, can’t speak for the arthritis!” says Si as he stirs his tea.  “But, yeah we’ve been lucky, hardly any snow either, though they don’t need it nowadays with the ATV’s and trailers.  Mind you Blackie didn’t tear up the country like they do either.”

“How old was he when he died, Ralph?”

“72.  He worked hard, the old bugger, course we did too, but not like then, and today’s crowd don’t know what work is.  Never had to cut up the winter’s wood with a bucksaw for sure. He was a good man, still miss him.

“Yeah, he was more father to us than our own, with them gone away to work all the time, I miss him too, he made us work, but he made sure we had fun too.”

Silas looks at him appraisingly, “Don’t give up what you have just remembering what you had Ralph.  Kids grow up fast, don’t miss out on the things that give you the most joy.”

“Yeah we were pretty inseparable, weren’t we? Still are some I guess, but I’m not going anywhere Ralph, I’ve got nowhere to go, and I’m content.  But you aren’t, you’re missing things.  You can’t have it both ways, the memories of here won’t go away just cause you do, and while we may not always have a cup for tea together, the phone is there when we wants it, and its not like your kids are on the mainland somewhere. We’ll get together pretty often. Make up your mind old friend, only time I see you smile is when you talk about those grandkids, think on that.”