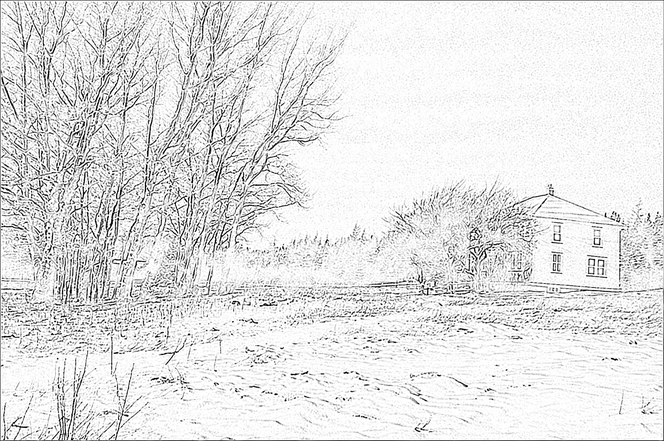 The house is on the side of a hill, a path climbing up to the well house. Rope clothesline hung between two huge old fir, propped up in the middle by a board sawed at the mill.

“Ralphie! Si! You young devils! Get off that path with them slides, your gonna turn it all to ice! Your father will lounder you!”

Pretending they never heard, they race back up the hill for another run. Shaking her head, she turns away, back into the warm house and the bread baking in the oven of the old wood stove.

His slide is wooden, with flat polished runners, made by his Dad. Not as fancy as the new coaster with the metal runners that Silas got for Christmas, but that one sinks in the heavier snow while his rides up on top. Anyway, taking turns on each others is as natural as breathing for Silas and Ralphie, inseparable as only young boys can be.

Flinging themselves down on the sleds, laying on their stomachs as they race down the ice slickened path, they steer into the huge snowbank by the woodhouse to emerge with red faces in a flurry of snow.

“Let’s go somewhere else, before she really gets mad” Ralphie says. “How about we try the long run?”

Silas’ face lights up, “You think the path is broken enough? Snow hard?”

The long run is the old woods path, used in summer to get to the ponds, berry grounds and wood and log stands, and in winter for ice fishing, and hauling the wood and logs out to shore. The path rises, gradually in some places, more steeply in others, but steadily till it reaches its peak about a mile from the harbour.

Off they race, streaking over the crust, sometimes falling through, never slowing, Silas’ new coaster left behind, they will double on the wooden sled.

The path is well flattened, and smooth, worn by many a horse and slide trip back and forth, as well as by townsfolk checking their rabbit slips and hunting.

Exhausted, exhilarated they arrive at the top of the long run, named Hap’s Cap by the old timers, though who Hap is, or was, no one seems to recall. Breath puffing they take a breather, hands on their sides as they survey the whole harbour. Its like the world has spread out the scene before them; stretching as far as they can see. Just a small harbour, but huge in their eyes.

After positioning the slide on the path, Si sits at front while Ralph gets behind and gives a running push.  Jumping on behind, he wraps his legs round to work the steering bar. Slowly at first, but picking up speed they slide down the hill, seeing the familiar terrain go speeding by.

A rabbit darts across the path in front of them. Si glances back to make sure Ralph has seen, but his delighted eyes already tell the story. Barely avoiding rocks as big as themselves strewn by glaciers in ages past, cruising past stumps of logs and firewood, they careen down the long run.

Suddenly Uncle Bax is in the path, axe in hand, rabbit over his shoulder. Jumping out of the way with a curse, he yells after them “You young sleeveens! You needs your hides tanned!”

Unbelievably quickly the garden is upon them, but they are going too fast and can’t steer through the gate.  Crashing into the paling fence, they splinter several, giving themselves a few scrapes, but no damage as they tumble into the snow drifts.

“Yeah, he’s gonna yell at us, and we’re gonna have to fix that come spring. But man! What a ride! Wanna go again?”

Ralph pauses for a second, “Naw. Its nearly dinner time, and I’m starved, lets work on the fort till mom calls.”

The fort is a snow bank, dug out with hands and packed down with feet to form a rectangular enclosure. It has no roof, but walls packed tight with snow hardened to nearly ice, and a tunnel through the bank to enter. Two small windows are left to the outside world; how else to fight off the imaginary Indians and pirates that assail them?

Crawling through the tunnel, they inspect the fort for damages. Assured all was OK, they settle back on their beef bucket chairs and start stockpiling snow balls for the inevitable assault to come. Hearing a familiar whistle, they peer through their portholes.  Its the long suffering Uncle Bax again, often their target of choice because as much as he may curse and pretend to be mad, he’s as likely to start the game with them as be the target of it.

Two snowballs come flying out of the fort, missing their intended target, but kicking up around his feet.  Startled he lets out another curse, and looking round, sees their bright eyes peering at him.  Making a huge snowball himself, he flings it back, with quite a bit more accuracy, catching the edge of a porthole and dousing Ralphie in snow.

Satisfied, Bax starts back down the road, his face accentuated by a mischievous grin.

With that, the house door opens and the cry of “Dinner!” echoes over the harbour.

Back through the tunnel, and racing to the house, old fashioned double mitts discarded, boots kicked off, and jackets in a heap on the floor, all to be picked up and hung by the wood range, or put in the warmer or on the oven door.

Dinner is the gourmet meal of Franco-American spaghetti on toast, and hot tea. Simple fare, but eagerly devoured by Ralph and Si.

After dinner has been consumed the boys settle down on the living room floor with a game of snakes and ladders while waiting for their clothes to finish drying near the stove.

Ralph’s mom sits down for a moment and asks “So boys, what did you do this morning?”

“I’ll tell you what they did, they nearly gave this old man a heart attack barrelling down the long run, that’s what they did.” says Uncle Bax as he walks in the door. “Plus broke a few palings off the fence by the look of it. Here Lucy, I brought you a brace of rabbits for supper.”

“Ralph?” she looks at him sternly “Yes Mom, we couldn’t make the gate, but we’ll fix it come spring before Dad gets home. How many rabbits did you get Uncle Bax?”

“Twelve, cleaned these couple for your supper. Any word from Bill, Lucy?”

“Got a letter this morning, yes.  No problems with the train, he’s at the camp in Millertown.  Might get home for Easter, but might not till they finish up in June. Damn those lumberwoods, taking a man from his family for months at a time.”

“Yes.” replies Bax “But its cash money, and there’s precious little of that around here. All you get for the fish is credit at the merchants, and can’t live on that alone. I’m glad I’m too old for that now, but still, in some ways I kind of miss it too.”

Glancing across at the boys he says “You aren’t playing that right! Go up the snakes, and down the ladders!”

“Well maybe not, but where’s the fun in doing everything like it says you should? Come on start over, I’m playing too!”

“For god’s sake Bax, your as much a youngster as the two of them.”

“Yep.” he replies “And so is Bill and that’s why you married him and loves his old creaky brother too!”

Soon, after much laughter, and rough housing amongst the “kids” the smell of roasting meat starts to waft around the house.  Bax looks up and says “Oh my, the day is gone and I got nothing done.  I must get meself home.”

“You may as well stay for supper now Bax, your fire is gone out by now, go back after and get it warm for the night once you get something to eat.”

Simple fare, meat from hunting, vegetables from their own gardens, gravy, home made bread, and tea.  Sometimes its the simple things that are best and create the best memories.

“No no, just gathering wool, caught up in memories.  I best get home I guess.”

“Well before you do, lets go down to the woodhouse and junk off that old tree of yours.”

Bundling up, the two old timers, still kids at heart, make their way out to the wood house where Ralph drags over the old wood horse, and Silas digs out his old bucksaw.

“Why do you still burn wood, Si? Can’t be easy to manage anymore.”

“No, your right of course, but the heat is different somehow, and it gives me something to do, even if I do have to buy it now. And I guess, to be honest, the main reason is I’m too contrary to change. It holds its memories too.”